The recent opportunity I had to teach a group of students on creationism vs. evolution brought me back to a couple of months ago. In July, I was granted the privilege of joining a group of Christian leaders for a 7-day trip of a lifetime rafting down the Grand Canyon. The prospect of being amidst PHDs, college presidents, professors and field experts was a bit daunting, but I figured that I could not say anything dumber than I really was, so it was worth going even if it were just to entertain them. 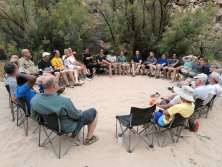 23 attendees, 5 trip leaders, and 3 boatmen were divinely brought together for the trip. My confidence in the biblical account of the flood got bolstered as we looked at the text of Scripture as well as the scientific evidence of a 6-day creation and a Global Flood from the rock and fossil records in the Grand Canyon.

Even though my assurance of the inerrancy of the Genesis account of creation comes from Scripture, I was amazed to discover the numerous proofs from nature of the truthfulness of the biblical text. As an example, the “Great Unconformity” is the name that has been given to the unexplained absence of material between two layers of rocks (here between my index and middle fingers) which are dated one billion years apart. If such an amount of time really went by between the formation of these layers, where did all the sediments go? This question remains unanswered by secular scientists.

I also learned about the Coconino sandstone. I found out it was not a Hawaiian beach cocktail but one of the layers of rock in the Grand Canyon formation. Old-earth proponents claim that is composed of fossilized sand dunes formed by the wind. However, sampling and observations made by young-earth scientists revealed that the grains in the Coconino are more angular and are sitting in a gentler slope than what is observed of desert sand dunes; in fact, their features are similar to underwater sand dunes (here demonstrated by Dr John Whitmore). 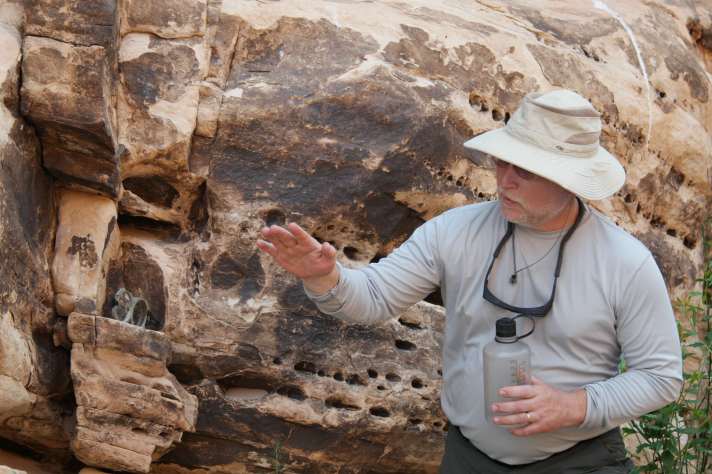 I believe in the biblical account of Genesis. God created the earth in 6 literal days around 6,000 years ago. He then sent a literal global Flood to punish mankind because of its sinfulness. The recently issued movie “Is Genesis History?” investigates biblical, historical, and scientific evidence for Creation and the Flood with interviews from dozens of scientists, including Dr. Andrew Snelling who was one of the leaders one the Grand Canyon Tour. Invest time and money in this movie if you are still making up your mind on this matter. Also, make sure to check out  answersingenesis.org where the biblical worldview is defended and many of the questions you might have answered.

The majestic Grand Canyon is the result of God’s judgment. How much more beautiful will the New Heavens and the New Earth be, where God will dwell eternally with those who repented from their sin and gave their lives to the One Seed of the woman, Jesus Christ, who crushed the head of the seed of the serpent (Genesis 3:15) through His death and resurrection.